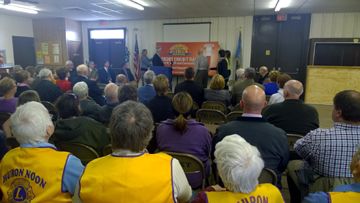 The new exhibit hall will bear his name: Nordby Exhibit Hall for 4-H, Youth and Community.

“Throughout his life, Mr. Nordby has been a generous contributor to the State Fair, monetarily and personally,” said South Dakota Secretary of Agriculture Lucas Lentsch. “He has helped the Fair achieve its mission in creating a successful, family friendly venue that showcases youth and community achievement. We are grateful for Mr. Nordby’s gift toward the building, which so deservingly will bear his name.”

The Foundation has raised $2,255,000 million of the $4 million goal. Paul J. Strawhecker, Inc. has provided consultation for the capital campaign.

“The Nordby Exhibit Hall for 4-H, Youth and Community will be a major asset to the State Fairgrounds,” said Jerome Hertel, SD State Fair director. “4-H events are a cornerstone of the State Fair and this facility will propel 4-H into the future.”

Those interested in supporting the Capital Campaign should contact the State Fair office at 605.353.7340 or visit www.sdstatefairfoundation.com.