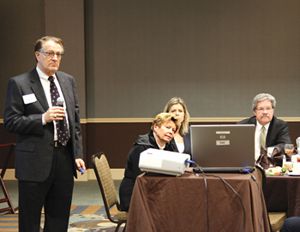 Story and photo from The Daily Nonpareil, Council Bluffs, IA

Plans for a massive facelift of the CB Stadium complex that surrounds the Wilson Middle School property on the west side of Council Bluffs – a renovation with an announced price tag of $10.3 million – appear to be headed for the back burner for now.

Speaking at a luncheon meeting at the Hilton Garden Inn Friday, officials of the Paul J. Strawhecker firm said a survey they conducted for the Council Bluffs Community Education Foundation to determine the level of support for the renovation concluded the $10.3 million fundraising goal to pay for the improvements “is unattainable at this time.”

The original $10.3 million renovation had called for the work to be completed in two phases. The first phase called for extensive renovation of the stadium, including installation of a synthetic surface, completion of an eight-lane track, replacement of the home bleachers, new entries and parking improvement at a total estimated cost of $8.15 million.

The second phase include replacement of the maintenance garage, softball and baseball field improvements, bus parking and soccer improvements at an estimated cost of $2.13 million.

In light of the survey’s findings, Council Bluffs School officials are now looking at a less-costly renovation that would be carried out in three phases. Total costs for the revised plan are estimated at $7.6 million.

The first phase, expected to be acted upon by the school board later this month, calls for renovation of the home bleachers, construction of a new maintenance building and some parking improvements. The estimated cost for the work, which would be completed before next fall’s football season, is $1.1 to $1.4 million.

District Superintendent Martha Bruckner said that it’s imperative to upgrade the bleachers to avoid the possibility of the district being named in a lawsuit if a fan is injured on the existing bleachers.

The second phase of the restructured plan calls for installation of a synthetic surface in the stadium, expansion of the track to eight lanes and some parking improvements. That phase carries an estimated cost of $1.9 million.

Much of the discussion at Friday’s meeting centered on the Strawhecker study’s finding that respondents questioned the location of the CB Stadium complex and suggested other alternatives should be considered.

Several who attended the luncheon, including Mayor Tom Hanafan, suggested it did not make sense to invest heavily in the complex at the current location if a different site might be selected for a stadium complex in the future.

The study found that school officials should consider the possibility of a partnership with Iowa Western Community College. When IWCC initiated its football program, the school played its home games at CB Stadium. The college has since agreed to a 10-year deal to play its home games in the Lewis Central High School stadium.
The study’s other findings included:

– The public views the school district improving in many areas.

– Expenses unrelated to education should be carefully evaluated.

– Some who were questioned do understand how the planned improvements supplement the district’s education program.

– The community is largely unaware of the Council Bluffs Community Education Foundation.

– The results of an Iowa West Foundation recreation study, which have not yet been announced, would affect donor giving for the school district’s renovation project.

– The proposed updates to the baseball/softball fields are not understood.

– Improvements for the field and track should be the priority.

– A public relations effort is need to educate about the importance, implementation, sustainability and maintenance of the stadium.

– The campaign goal ($10.3 million when the survey was conducted) would be dependant upon Iowa West Foundation financial support.

– There was no strong self-identified volunteer leadership for the campaign.
Strawhecker said the revised first phase – repair of the stadium’s home bleachers – is in the works, “and step two should be to talk about other sites.”