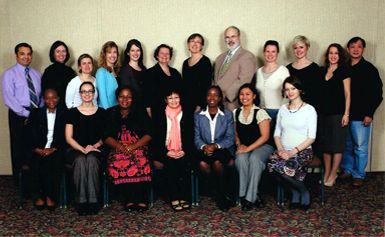 (Omaha, Nebr.) From April 2-9, 2011, 107 women’s health practitioners from the U.S., Poland, Mexico, Nigeria, Ireland, New Zealand and Canada, gathered in Omaha to complete Education Phase II of the Pope Paul VI Institute for the Study of Human Reproduction’s training in the Creighton Model FertilityCare System and NaProTechnology. It is the largest number of practitioners to attend the Institute’s the annual training, which has been offered for 33 consecutive years.

The Pope Paul VI Institute for the Study of Human Reproduction is the leading education and research center in the United States in the area of natural regulation of human fertility and the development of morally and professionally acceptable reproductive health services. Dedicated to Pope Paul VI’s challenge to “physicians and health care professionals” and to “men of science,” it is a living memorial to the challenges placed before us by the Pope Paul VI in his encyclical letter Humanae Vitae (Of Human Life).

According to patient and conference attendee Joanna Najfeld of Warsaw, Poland, the Creighton Model and NaProTechnology is a revolution in women’s health.

“I strongly believe that all women deserve the empowerment that comes from self-awareness of their body, navigating their own fertility in an educated and reliable manner,” she stated. “I am going to work with couples and women, teaching them to track the symptoms of their cycles in order to navigate fertility and monitor health, and, if necessary, obtain the proper NaProTechnology diagnosis and effective treatment for infertility, miscarriages, premenstrual syndrome, post partum depression, ovarian cysts, abnormal bleeding, or whatever the problem may be. I am really looking forward to making this revolutionary FertilityCare service accessible to women in my country.”

Another attendee, Ezenkwele Ezi, an OB/GYN practicing in Enugu, Nigeria, plans to return to her country and become a medical consultant of NaProTechnology. Dr. Ezenkwele said the most striking thing she learned in the second education phase is the possible link between NaProTechnology and breast cancer.

“More research needs to be done in this area,” she explained, “but the results could possibly provide a solution to preventing the breast cancer, which would be an enormous achievement in medicine.”

Dr. Lewis D. Lipscomb, an OB/GYN practicing in Winston-Salem, NC, said that after attending Education Phase I in October, 2010, he decided to cease prescribing contraception and performing sterilization.

“I can finally go to work with a true sense of peace, knowing that I am practicing in accord with my faith, and helping to promote a culture of life, family values, and respect of sexuality,” he stated.

The Creighton Model FertilityCare System and the new women’s health science of NaProTechnology have been developed through a research and education effort coordinated and directed by Thomas W. Hilgers, MD, director of the Omaha-based Pope Paul VI Institute for the Study of Human Reproduction and clinical professor in the Department of Obstetrics and Gynecology, Creighton University Medical Center.

The Creighton Model FertilityCare System provides comprehensive, professional services through individualized follow-up, standardized teaching tools and ongoing research. The Creighton Model is a medically standardized modification of the Billings Ovulation method. It is the only education program in this field that meets the education demands of a newly emerging allied health profession and provides a case management approach to teaching.

A highlight of the training conference was the presentation of a “Fides Et Ratio” (Faith and Reason) medal awarded to Dr. Thomas Hilgers by the Polish Catholic Scholar’s Guild. Pharmacist and Pope Paul VI Institute faculty member, Janina Filipczuk of Toronto, Canada, received the medal for Dr. Hilgers in Poland on March 19. She presented it to Dr. Hilgers, “for his faithful service of the human person and its dignity, as well as the affirmation of human fertility.”


Founded in 1985, the Pope Paul VI Institute for the Study of Human Reproduction has developed a new approach to women's health care that embodies the best principles of medicine and offers superior treatments to women and challenges mainstream medicine, which relies on contraception, in vitro fertilization, and abortion. Through the Creighton Model FertilityCare System and NaProTechnology, its healthy, moral solutions to issues in women's health care impact the lives of thousands of women, couples, doctors, medical students, priests, and babies nationally and internationally. More than 1,000 teachers and 300 physicians have been trained in the Creighton Model System.
Return To List